The leaving of Liverpool in one of these American packet ships was an emotional occasion for the emigrants, most of whom had never been on an ocean-going ship before. The Hottinguer, commanded by Captain Bursley in 1845, was typical of these ships, being a vessel of 993 tons burthen. She left the Mersey, bound for New York, early on the morning of 6 May, 1845. Among her passengers was the aforementioned Sarah Mytton Maury, champion of the emigrant’s cause, who described in some detail what it was like to be on board one of these emigrant ships, when outward bound from the port of Liverpool. 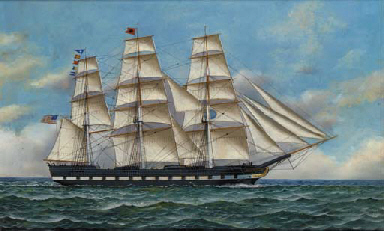 At 11 a.m. the ship got clear of the dock, and almost immediately the Captain urged Mrs Maury, and the ship’s doctor, to climb on to the roof of the deck house, so that they would be well out of the way, while the muster roll was called. Including the crew and the master there were 433 people on board the Hottinguer – 397 of them being emigrant steerage passengers, the only cabin passengers being Mrs Maury, her son, and a Mr. King, a resident of New York.

Soon they were clear of the Mersey, and at 4 p.m. the steam-tug and pilot left the ship at the Bell Buoy; and at 6 p.m. Sarah Maury watched with interest as Captain Bursley, and his officers, divided the crew into watches.

Apart from the commander, first, second, and third mates, the crew of the Hottinguer consisted of the steward ( a black man) – two black cooks, a carpenter, and untypically for a sailing ship, a blacksmith, and twenty four sailors. Managing the crew must have posed something of a problem for the captain and his officers, for it was composed of men from no less than ten nations, England, America, Spain, Italy, France, Denmark, Prussia, Holland, Portugal, and Scotland – a fair number of whom had little or no understanding of the English language!

Mrs Maury and her son paced the deck until 9 p.m., watching the receding shores of England; observing the Black Rock, Leasowe, Bidston, and point of Ayre lights, and then the rocky coast of Wales. At midnight the Hottinguer sailed silently past Holyhead, and on the following day all those on board could see the coast of Ireland. Under a heavy press of canvas they passed the jagged Tuskar Rock, and lastly Cape Clear. On the morning of the 8th�forty-three hours after leaving the Mersey – they were well beyond the sight of land, far out in the great open expanse of the Western Ocean. It was then that Sarah Maury had the opportunity of watching the emigrants, when they were on the open deck.

Despite all their tribulations, the poor Irish Emigrants remained remarkably cheerful. She watched, with great interest, as several hundred emigrants, mostly Irish, climbed out of the steerage, noting that several of them were carrying musical instruments, which included a pair of bagpipes, two or three fiddles, and some flutes. The musicians took up their positions, and soon they were joined by a whole chorus of singers. Within minutes the deck of the packet ship was akin to events at an Irish country fair, with scores of men, women, and children, laughing, dancing, and jigging around the caboose – making it almost impossible for the sailors to work the ship. The very considerate Captain Bursley tolerated it for some time, then, by way of a kindly ruse to restore order, explained to them that if they continued to dance in that manner they would upset the ship. This seemed to work, for without a murmur they all sat down, becoming as quiet as church mice! The rest of the passage was relatively uneventful – all on board getting safely to the New World, some weeks later. (6)  However, in 1850, the Hottinguer sank (see below).

“THE LOST AMERICAN PACKET-SHIP.- As Captain
Bursley stood deservedly high in the estimation of all who
knew him, and as he was one of the oldest captains frequent-
ing our port, we have gleaned a few particulars of his life,
which may not be uninteresting to our readers. The gallant
captain was born at Cape Cod, Massachusetts, in the year
1798, and consequently was in his 52d year when he died.
He seems to have imbibed a desire for a maritime life from
his infancy, for before he was 12 years of age he entered the
mercantile marine of the port of Boston, and so quick was
his progress in his chosen profession that before he attained
his 21st year he commanded an East Indiaman from Cal-
cutta to Boston. It is now upwards of 21 years since
he first entered the Mersey as master of the Dover, a
first-class vessel of the original Boston line of packet-
ships, since when he has been a frequent visitor to our
port. At a subsequent period he became connected with
the Black Ball or New York line, in which he com-
manded the Silas Richards and the Orpheus, and after-
wards the Cambridge, belonging to the same line. It will be
in the recollection of many of our readers that the Cam-
bridge was severely tried, as were also the nautical skill
and judgment of her commander, during the great gale of
1839. On that occasion Captain Bursley could not obtain
a tug-boat to tow him out of the river, and when the storm
arose in its violence and might, his ship slipped her anchors
and was driven on towards the Prince’s-pier. Every exer-
tion was made by both master and men to arrest the
threatened destruction of the ship; trusses of hay were
lashed over her sides to protect her, hawsers were made
fast where available, and when every other inducement
failed in procuring a steam-tug, the commander exclaimed
with his accustomed liberality, “1,000l. for a tug.” But none
would venture, so imminent was the peril. In this emer-
gency the remaining anchors were tried, and as they held,
the noble ship was preserved from becoming an immediate
wreck. He has often experienced the hardships of a sea-
man’s life. About 14 years ago (in company with Captain
Marshall, now of the Republic) he was nearly wrecked in
the Orpheus, on which occasion he had to put back to this
port for extensive repairs. Fifteen years ago his brother, then
captain of the Lyons, was lost off Port Patrick, where he was
interred and a monument erected to his memory by the sub-
ject of this sketch. They now sleep in death within 80 miles
of each other. At the close of his career with the Black Ball
line he took an active part in the organization of Fielden’s
line, to which he has since belonged, as master of the Hottin-
guer, a fine vessel, about seven or eight years old. No better
sailor left this port; and it is affirmed of him that no man
knew the Channel better than he did; and therefore the
cause of the calamity referred to remains a mystery at pre-
sent. We believe that he intended that this, if successful,
should have been his last trip; and that he felt delighted at
the prospect of enjoying in ease and happiness, amidst his
friends and in the bosom of his family, that otium cum dig-
nitate to which a long, laborious, and well-spent life emi-
nently entitled him. The deceased was highly esteemed by
all who had the pleasure of his acquaintance as a sincere
friend, an honest man, and a good Christian. He has left a
wife and family to mourn their loss.- Liverpool Albion.”

“LOSS OF THE PACKET-SHIP HOTTINGUER.- LIVER-
POOL, Thursday.- We have intelligence to-day of the loss of
the ship Hottinguer, with Captain Bursley and 13 of his
crew. This vessel left Liverpool on Thursday last for New
York, with a full cargo of merchandise and about 20 pas-
sengers. On the 12th, at 6 a.m., during a gale from the east-
ward, she struck on Blackwater-bank, near Wexford. Shortly
afterwards the passengers, with eight of the crew, landed in
the boats at Morris Castle, the captain and the remainder
of the crew having remained on board. On Sunday morn-
ing she floated off the bank, and Captain Bursley endeavour-
ed to take her into Kingstown-harbour, having the screw-
steamer Rose in company acting as pilot. During the day,
however, she struck on Glasmorgan-bank, and a heavy sea
running at the time, the upper works of the vessel were
washed away, and there remains little doubt that the cap-
tain and crew perished in the course of the following night.”