The name means �good cheer� (“bel” means “good”, and “cher” means “cheer”), and the spires of the churches of the town still rise upward toward Heaven as symbols of the region’s Great Awakening heritage. Other noteworthy landmarks in Belchertown include the Common and The Stone House, said to be one of the best small museums in Massachusetts, though the author has yet to visit the establishment.

The town�s rich history includes its first name, Cold Spring, for the discovery of plentiful cool waters by a wayfarer traveling the old trail from Northampton to Boston. The wayfarer reportedly went by the name of Cowles, whose descendant is today the owner of the house in which the author of this webpage and family reside, a stone�s throw from the Gravel Pit, the Dwight Chapel, and the Dwight Cemetery.

The land around Cold Spring was used by Northamptoners for hunting in the early 18th century, and the old New Englanders did not always wage a fair contest with nature: men would go into the woods and start a series of fires that would form a circle, driving the animals towards the opening at one end where they were killed. 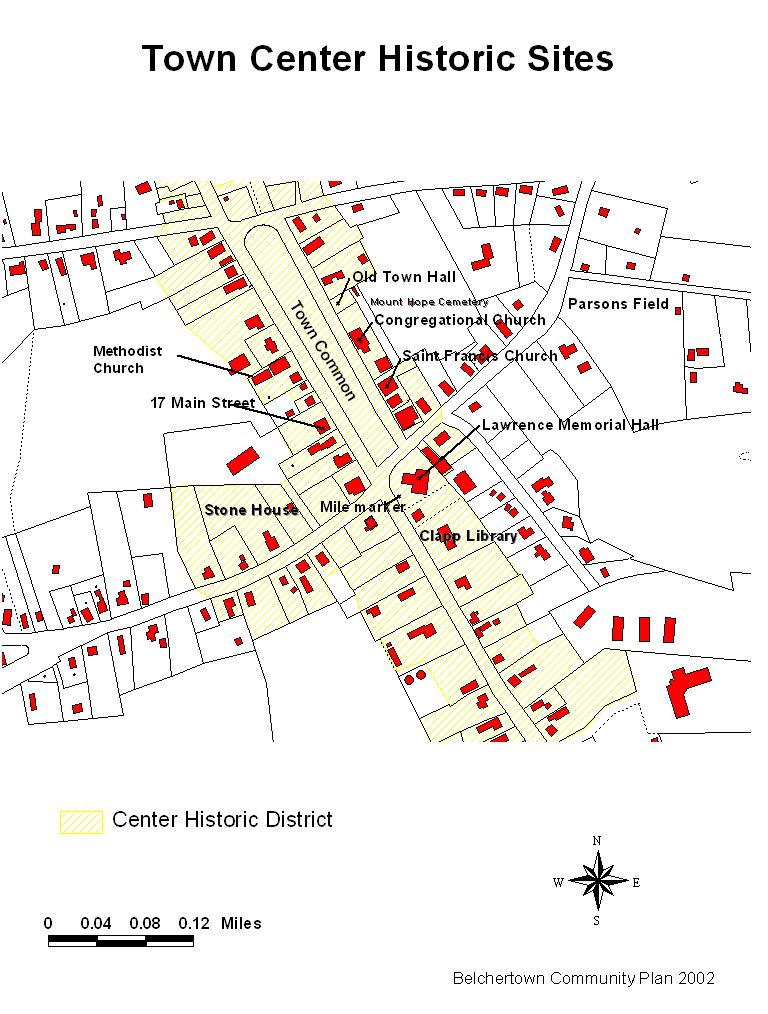 The Belchertown Common�replete today with a gazebo, broad manicured lawn, and picturesque New England steeples�was then one of the more frequently burned areas, and known as �Grasse Hill.� The farmers of Northampton and Hadley also drove sizable herds of horses, cattle, sheep and pigs to the center of Belchertown during pasturing season.

The town played a role during the American Revolution, however minor or major relative to the reader: a landmark in Belchertown is said to have been used as a signal station during the Revolution. Later, the Marquis de Lafayette visited another house there. Muster-rolls list the Belchertown Minute Men who marched to Cambridge, Massachusetts (the town of Governor Belcher’s birth) on April 20, 1775 to defend that region during the call to arms that began the American Revolution. As seen from the map, the town has many historic aspirations.

The town has been noted as an agricultural community (dairy-farming and apple-growing) and during the 1800s as a center for the manufacture of carriages, wagons, and sleighs. Several persons of distinction were born in Belchertown, including writer/editor Dr. Josiah Gilbert Holland. (Interestingly, Jonathan Belcher’s mother was Sarah Gilbert Belcher, daughter of Jonathan Gilbert.) Dr. Benjamin Rush Palmer, who played a significant role in the history of medicine in Kentucky, did his general practice there.